After The Lockouts II – Gladys’ War On Music 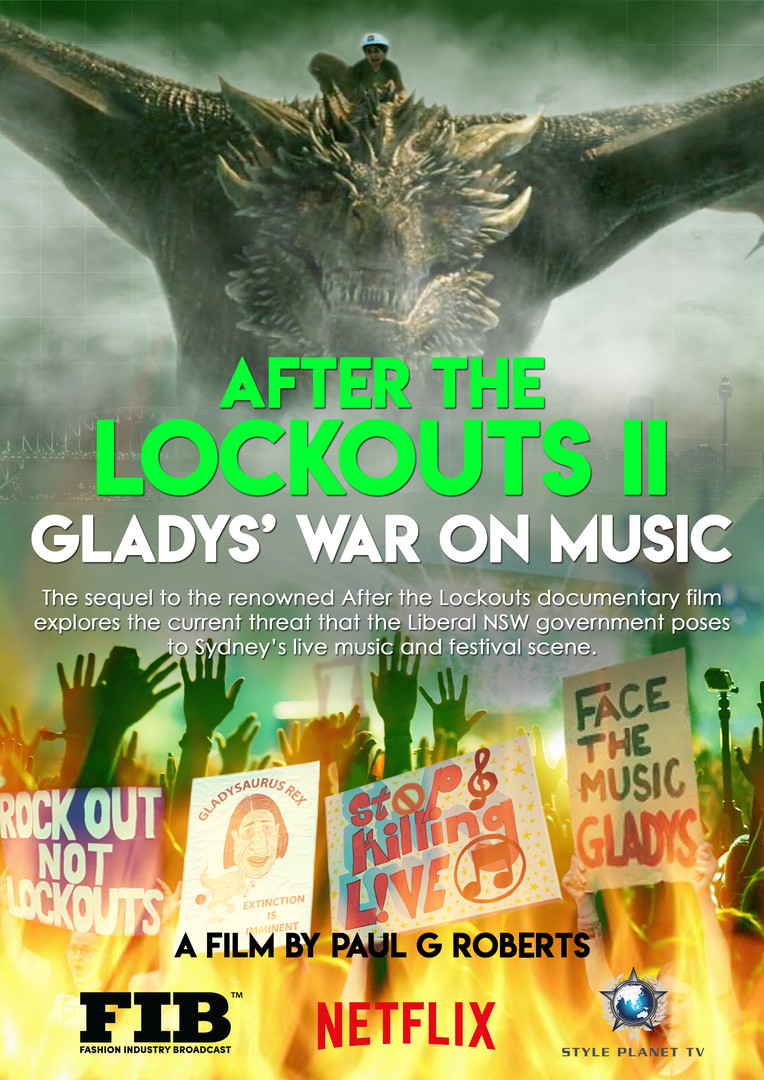 The sequel to the renowned ‘After the Lockouts’ feature, this second film explores the attack on live music that the Liberal NSW government’s new regulations poses, and takes a deeper look into the machinations of power and their impacts on business, culture and personal liberties. It is a chilling look into a world that shows how a Government and corporate media cannot always be trusted to act in the best interests of the people. And it makes a powerful case for individuals to organise and push back against flawed policy and improper legislation. This is a trend that is becoming more ubiquitous around the world, that is seeing more and more individuals and collectives stand up and demand change. This has become one of the biggest issues of our time.

NSW Premier Gladys Berejiklian and her cronies would like you to believe that music and festivals are the epicentre and the most lethal arena of the countries battle with drugs. But it transpires that this is really just a convenient case of misdirection to distract the public from knowing the truth about the State Government’s abominable failure on Drug Policy.

The Liberal government seems not care about the people who struggle with addiction and die in the shadows of regional Australia every year, and it doesn’t care about teenagers who die at festivals either. Because instead of doing anything to actually make attending festivals safer, they’ve used them as a diversionary tactic from a bigger, harder, more complicated issue. They have rejected reason every step of the way and stormed ahead with a drug approach that is little more than political point scoring. The NSW Government’s approach to drugs is not just ineffective, or lazy, or misguided, though it is all of those things too. It is immoral and it is letting people
die.

This film follows on from the first film, where we look deeply into the systematic and wilful cultural vandalism perpetrated by the NSW State Government, the first film focussed on nightlife, this film deals with the recent attacks on live music in NSW. “Make no mistake there is a culture war being waged in NSW Australia, as evidenced by the many recent global city rankings, and the latest theatre of battle is a war on music.” Early in 2019 the NSW government rushed in radical legislation that has effectively served the NSW music industry with it’s “death sentence”. The film starts at the recent rally “Don’t Kill Live Music” where 20,000 people protested, where we hear from various voices from the music industry.

We go into the details of the current situation: where popular festivals such Mountain Sounds and Psyfari have been cancelled, the catalyst for this “war on festivals” was the drug related deaths of five young festival goers in late 2018, Gladys Berejiklian released a press statement afterwards revealing that new and stricter music festival event laws would come into place on March 1st, 2019. The information is accompanied with headlines and articles from major newspapers across Australia,footage from Defqon-1 and, of course, Berejiklian’s original press release video.

The official report from the ‘expert panel’ said to decide on these new laws is shown as we dive deeper into what the new regulations mean for festival organisers. We discuss the new liquor licensing program, the heavy fees, the new offences for drug possession and drug supply, as well as the risk assessment policy. Footage of pill testing and headlines discussing the success of it at Groovin’ the Moo are shown alongside our questioning of why the Berejiklian government refuses to consider pill testing and harm minimisation as a option. Political experts, such as Ex Sydney Deputy Mayor Jess Miller and Keep Sydney Open’s Tyson Koh, assist with relaying this information in a manner that is clear and unequivocal.

We look at how these attacks will further damage the local music industry and the economic, cultural and social life of Sydney. Keep Sydney Open’s Tyson Koh, Cr Jess Miller, Deputy Mayor Jess Scully, Jane Slingo of the EMC and CEO Live Performance Australia Evelyn Richardson discuss how detrimental the laws are from a social and political standpoint. Musicians such as Julian Hamilton of the Presets, Murray Cook, Flea and Anthony Keidis of the Red Hot Chilli Peppers all voice their feelings towards the issue and their reason for speaking up against it.

Promoters Adele Robinson of Fuzzy and Bluesfest’s Peter Noble detail the affects these laws will have on the business of festival events in New South Wales and the overall betrayal of the art scene. Interspersed between these personal accounts is footage of the Don’t Kill Live Music rally and footage of the mentioned musicians playing at Australian festivals.

The film also takes a deep look into the State’s decades long failed Policy on alcohol and drugs, and the peculiar relationship the Government has with gambling and casino’s. We talk to medical experts about pill testing and strip searches, and make the case for ongoing public vigilance against Government and flawed Lawmakers who have shown a proclivity to time and time again serve special interests versus those of the community.

This Fight Has Just Begun !

We hope that this film galvanises more people to stand up, speak out, protest, and hold Governments accountable for poor policy and shady dealings.