Prepare yourselves for 2 days of cinematic genius from Saturday, November 25 with our first ever Tropfest style outdoor extravaganza. Yes, we are celebrating our 3rd birthday in 2017 so we’ve stepped it up a notch.

Before you do anything book yourselves a ticket to our Dusk Cinema event held on the grass outside the Illusions theatre at the Sanctuary Cove Resort. Afternoon will turn evening and we will host our selected shorts on an outdoor big screen. Drinks and nibbles included in the cost. Make sure to book now so you don’t miss out on an evening of fun.

Got Questions? Send us a private message on FB or alternatively email us at hello@sanctuaryfilmfestival.com

Pauline, a full-time carer for her disabled son Nathan, orchestrates a ruse to form a meaningful connection with the man next door.

Two men share coffee in a hotel room, each trying to ignore the disturbing truth behind their meeting

After a couple makes a quick stop out in the middle of nowhere, they cross paths with a group of criminals on their way out of town after a robbery gone wrong.

After a horrific car accident claims the life of his soulmate, a
young scientist struggles to let her go.

A young girl comes home after a big night out to find Pop waiting. Thinking she’s in trouble, she discovers a problem much bigger than herself.

A BAFTA Los Angeles® winner and Australian Academy Awards® nominee, THE TELEGRAM MAN explores the impact of World War II on a close-knit Australian farming community. The film was selected, out of more than 15,000 entries submitted from around the world, as one of the 50 semi-finalists for Your Film Festival, a global film competition conducted by Ridley Scott, Michael Fassbender, Google, Emirates and the Venice Film Festival.

While a young woman helps her father pack up his house, they are both increasingly aware of the presence that they always knew was there

Nothing’s going to stand in the way of what Abby wants; not school, not her mum, and definitely not her best friends: Nina and Amiel. They’re skipping last period to get Abby ready before her boyfriend arrives. But has Abby got everything she needs to be safe? Wild is about how we negotiate our urge to rebel and our instinct to survive.

A renowned photographer returns home to seek closure with her estranged father who has been diagnosed with Alzheimer’s.

A young boy moves to a new neighbourhood and discovers his passion for go-karting.

A film that explores the relationship between man and technology…told from the perspective of a phone.This hand-drawn animated film is based on the poem ‘Seven Billion’ written by the film director that won 2 National poetry awards: The Young Australian Writer’s National Award for Poetry, selected out of a field of 30,000 and the Karen W Treanor Poetry Award (Youth).

For estranged sisters, Liz and Ellie being a family has never been easy – but there are some horrors you create yourself.

Three homeless, illegal immigrants struggle to survive on the streets of Los Angeles.

A creepy stalker Uber driver goes a step too far stalking his passenger.

A sad glimpse into the horrific world of the South Korean dog meat trade and the people in South Korea who are trying to stop it.

A Las Vegas magician who performs at children’s birthday parties convinces the woman of his dreams to be his assistant, while the local Mob guys try to make him disappear permanently!
-BILLY TOPIT MASTER MAGICIAN

BILLY TOPIT MASTER MAGICIAN is excellent at performing magic, he is just not very successful. His life gets complicated when some greasy mob guys comes after him looking for money. Billy uses his magic skills to avoid confrontation as long as he can, because he wants to concentrate on his magic career and his new girlfriend.

Things get wildly out of control and BILLY TOPIT MASTER MAGICIAN has to call on his best friends for help. The Magician, the Ventriloquist, the Jugglers, and the Mime will have to stage a rescue! These guys are not the A-Team, not even the B-Team, but they’re all Billy’s got.

“A fun, magic filled romp sure to delight young and old alike!”
The Culture Buzz 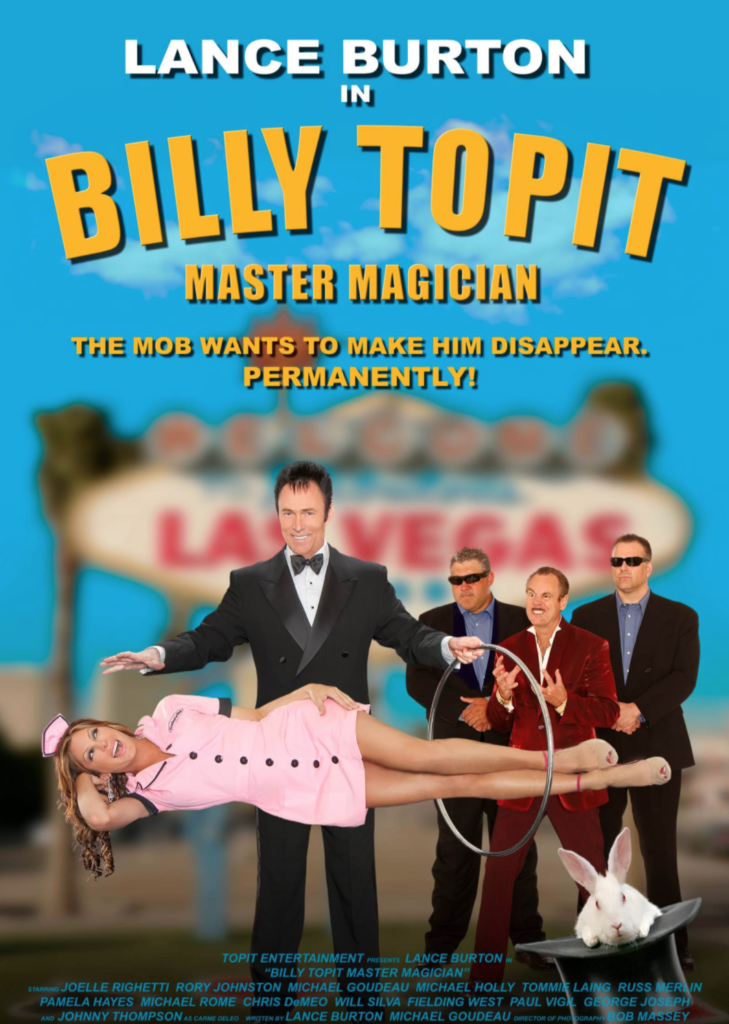